Hamilton pool preserve located on highway 71 in southwest Austin. We went there last weekend and was pretty stunned by the place. The entry fee is $10 per car and there is a quarter mile hike to the falls/pool from the parking lot. 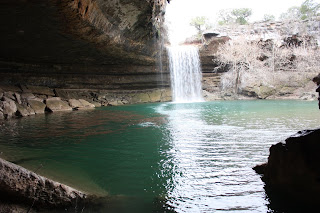 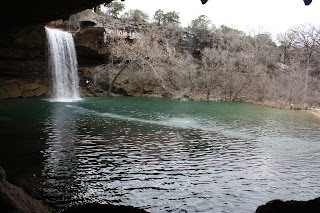 At the end of the quarter mile downhill hike we saw a green pool and a water fall, there was also a small trail that took us behind the falls. Thanks to the rains so far this year, the water fall seemed to be in pretty good force. The pool appeared emerald green but the water flowing out of the pool was pretty clear. The overcast sky on Saturday added to the charm. 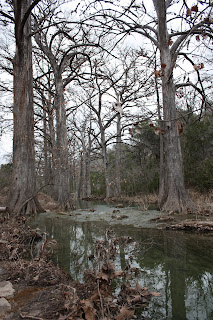 A worthy place to visit for Austinities, the trail was pretty wet due to the recent rains and the other trail leading to the river was closed due to the same reason.  The preserve allows swimming at our own risk  (no life guard on duty), we did not see much facility to do a picnic sort of thing there.
Posted by Manjunath No comments:

We made a day road trip from Jaipur to Ajmer and Pushkar. Ajmer is the home of the beautiful dargah. The place is very unique that people from all faiths and religions visit the place, it has a long history for it has one door built by Ala-ud-din-Khilji and one built by Emperor Jehangir. It was one of the crowded places I have ever visited. I felt the place had an unique energy of its own.
Pushkar boasts of the one and only brahma temple in the world. The temple is quite big and is a temple complex with quite a few smaller temples inside. There is a lake in pushkar but it was pretty dry when we went. The locals claimed lack of rain but my engineering mind said all the canals to fill the lake have been blocked by housing development around the lake. 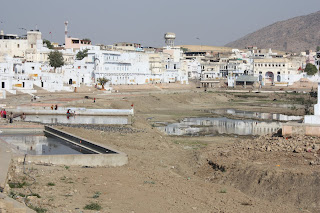 The next stop was towards Fatehpursikri on the way we stopped at one of the Rajasthan Tourism's hotels and had the best aloo paratha's we had ever had.
Fatehpursikri, as per my remembrance of the history it was part of an effort by emperor Akbar to shift capital from Delhi. There is a beautiful fort in Fatehpur with a mosque in the center. The fort is built with red stone, while the mosque is made from white marble. It appears like a fort from the outside but from the inside it appears as a place to enclose the mosque. 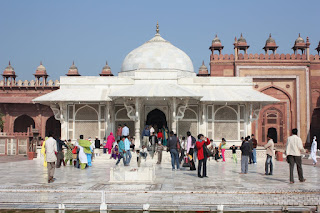 The windows of the mosque are so uniquely designed that from a distance it appears like a sheet of glass than a stone window. 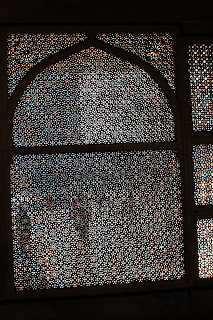 The guide mentioned Akbar's wife Jodha had a small temple in one of the corners of the fort. According to him the below pic is the inverted temple built for Jodha. 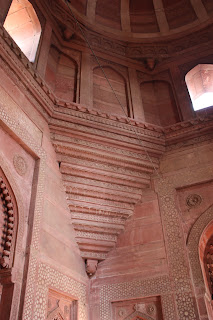 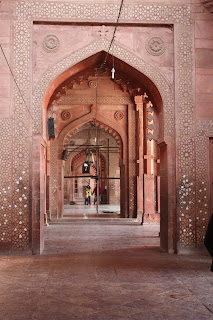 The unique feature about the doors in the above pic is that all the doors are of same height but they appear as though the preceding door is smaller than the succeeding door. It is not a photographic gimmick but is built that way.
The fort also has the tunnel through which supposedly Anarkali was smuggled to Lahore and it also houses the graves of lots of near and far relatives of Akbar.
A beautiful place reflecting Mughal architecture but it is so infested with people who claim to be tour guides and photographers that it takes some of the charm away. Supposedly lots of bollywood movies have been shot here.
Posted by Manjunath No comments:

I have been associated with Art of Living Austin for more than five years now and I have witnessed its progress as an organization. It was just a couple of years ago when some of my friends took the initiative and decided to have a place we can call a center. There were lots of logistics to be worked out including but not limited to, how to finance the place?, what would we like to accomplish from this place? and aren't we good the way we are?.
I too had all these questions and to say the least was not too interested in the center. Thanks to the YES mind of some of the people who just dedicatedly worked towards changing everyones attitude (including me) from a NO to at least a May Be and we had a place.
The center presently sits in a commercial complex at 5555 N Lamar and does not seem much from the outside. Inside are two halls, one with yoga mats spread over uniformly (which we call the meditation hall) and other a lounge for people to hangout while some activity is going on in the meditation hall, but this is the place we can call our own. Here we are not dependent on others schedule to host an event or organize a course. No fear of getting kicked out for we ran out of time. We no longer have to hunt for a place to hold a satsang and because of its central location and accessibility by bus route makes the place even more attractive. Just a couple of days ago I celebrated one of the most awesome shivratri's.
Kudos to the people who truly drove the initiative and made it all happen. May be my perception, but it seems that we are having lot more events and activities now that we have a center.
Yes, I do see that the whole thing could have gone south and the skeptics like me could have bragged that "we been right from the beginning". But I am glad to say that it is not the case and the center is thriving (from what I can see). It is truly an example of great vision and leadership.
Posted by Manjunath No comments:

Our Journey started in Delhi and Delhi to Jaipur has a beautiful highway/toll road, the toll is pretty expensive and they collect money every few kms. Road/tourist tax in Rajasthan is much higher than UP but roads are better maintained than UP.

Jaipur can be divided into old city and new city. The old city has Hawa-Mahal, City Palace and Jantar Mantar. The new city has the developed part of Jaipur. Jaipur has 3 forts (Amer Fort, Jiagarh Fort and Nahargarh fort), we only visited Amer and Jaigarh fort.

The royal family hasn't completely relinquished its power but has retained control over parts of Jaipur. I felt there is still a sense of respect towards the Raja.

City palace is owned by the present Maharajah and he has converted part of the palace to a museum and tourist attraction. The curious attractions were the dress worn by one of the previous Raja's who was 7ft tall, 4ft wide and weighed 280kilos and the huge silver drums constructed to carry ganga-jal (water from river ganges) to England. Inside the palace the present maharaja is funding an art school where the local artists/artisans are encouraged, great effort to preserve some of the ancient art secrets. We didn't have much time but the paintings were truly marvelous.

Next stop for us was the sound and light show at Amer fort, it gave us a brief history of Rajputana and of the Amer fort itself. It was pretty spectacular, one of the attractions that should not be missed while in Jaipur. The show commentary is offered in 2 languages (English and Hindi) and English commentary almost costs twice as much as Hindi.

Jaigarh fort is a massive fort and felt like it had more emphasis on protection and defense than architecture. The fort boasts of one of the world's biggest canon, so big that it was fired only once and never after. The fort has a well inside which supposedly was a cover-up for a treasury. The treasury used to be locked by an unique lock that took 5 keys to open. The fort supposedly used to have a rain water harvesting system, the small canals used for the same are still intact. The guide mentioned that the fort used to have enough storage space for ration to survive a siege of several months. If you visit this place hire a guide to tour the same.

Amer fort is a more beautiful fort than Jaigarh fort and is much smaller and more artistic than Jaigarh fort. The fort has undergone transformation over time and I felt this fort had more muslim/moghul influence than Jiagarh fort. This fort seemed a place for peace time than war. One of the unique things I remember about the fort is the royal bathroom, it had so many smaller rooms inside it that I almost got lost inside. The fort also had a modern paid bathroom and it was so well done and maintained that for once I felt the money was worth.

HawaMahal is a 5 storey unique building built in the heart of Jaipur, it was built for queens to watch kings parade while it was passing through the heart of Jaipur. It has unique windows that are designed for view of outside from inside and not the other way. The guide told us that the older queens were given lower floors and younger queens used to get the higher floors (seniority in reverse order). Hawa Mahal has some unique designs to maintain privacy and security of its residents.

The other attractions were Jalmahal which is submerged in a lake and in the process of being converted to a hotel and Jantar Mantar, which we didn't have time to visit.

It was good to see that the Rajasthan government is in the process of preserving the places through repairs. At the same time some miscreants were showing their talents in calligraphy on newly repaired walls.

I felt Rajasthan has maintained the link between the past and the present, the forts have stood test of time but unlike other places they haven't whithered away, they have gone through modifications and transformations but they haven't lost their originality. I truly appreciated the Rajputs for having maintained their culture intact through the Moghuls and the British. Some of the palaces are still left intact and maintained as tourist attractions and not converted to hotels.

On the whole Jaipur is an expensive place to visit but worth one's time to visit. It is a good idea to hire a guide to see some of the attractions but remember to bargain/bargain/bargain.