This incident happened nearly a year ago. Back in 2009 we made a trip to India and in that we had planned to visit the Bangalore Ashram. The reason to visit the ashram was two fold, one was to see the place itself and the other was to buy stuff from the divine shop in the ashram. All was well and we picked a date to visit the ashram and since we were travelling from Mysore to Bangalore we added couple more items to our agenda.

We reached Bangalore as we had planned and thanks to my laid back attitude and inadequate planning, by the time we reached the Ashram there was a satsang about to start and because of which they had closed both the divine shop and the main meditation hall. We were told they will open it after the satsang, we were a bit disappointed but we got to see guruji and that took away half the disappointment. Since we had to return to Mysore the same day we couldn’t wait for the satsang to finish and then the divine shop to open. So, we came back empty handed from the Ashram.

After returning to Mysore, we checked out the local music stores to see if they had any of the CDs we wanted and all we got in return was bad (read angry) customer support. All avenues were closed and I was thinking we should make another trip to Bangalore before we get back to the US.

A day or so later some volunteers from Art of living Mysore came around distributing flyers about their upcoming courses and events. My in-laws took the flyer and kept it on the table. I saw the flyer and I remember making comments on its design and sandhya took it for safe keeping and we forgot all about it as we had a wedding to prepare for (sandhya’s sisters wedding).

One fine evening I had a brain flash and it occurred to me that if the Art of Living Mysore is a big enough chapter, then they probably have their own divine shop and I could get my CDs from there. So, I called the number on the flyer and the lady on the other side was really nice (true with any AOL volunteer whose phone number is listed on the flyer) and she told me that they do not have a divine shop yet but there is something better going on in Mysore. She directed me to Mysore Dasara exhibition where Art of Living foundation had a stall.

Later It occurred to me, when the intentions are strong, nature will show a way and all I had to do was to energize my brain cells and do a little effort.

Why don’t they just call them what they are?

I saw this in an infirmary and figured its worth a click and share, but apparently it didn’t seem to make an impact on people who work there; I saw the duty nurse smoking outside the infirmary right after I saw this poster. 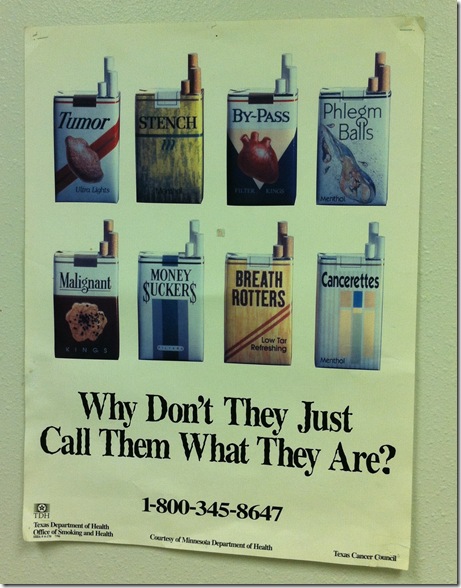 Posted by Manjunath No comments:

What really motivates us?

Ever wondered why linux is still thriving and non profit organizations continue to flourish, the following video might shed some light on the same. The narration is a bit fast, might need couple of revisions before the message sinks in.